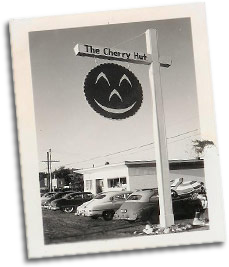 1922 - James and Dorothy Kraker opened the original Cherry Hut on the north shore of Crystal Lake as an outlet for their orchard products. The smiling face of Cherry Jerry was cut into the crust of their pies and to this day it is the distinguishing sign of the Cherry Hut and its products.

1928-1934 - The Krakers established and operated a second Cherry Hut located just North of the Post Office in Benzonia.

1931-1935 - The Krakers extended their operations to a Cherry Hut on East Front Street in Traverse City.

1935 - All Cherry Hut operations consolidated at the present location on Highway U.S. 31 in Beulah.

1942-1945 - The Cherry Hut was managed by the Kraker’s daughter, Althea, while their son, Jim served in the armed forces during World War II.

1946 - The Jam Kitchen opened in Benzonia to prepare and from which to distribute the Cherry Hut jams and jellies for which there was an increasing demand.

1946 - Leonard Case, Jr., a Benzonia High School sophomore, was taken on as the Jam Kitchen “Boy” and since 1948, with the exception of two years in the army, has personally prepared the delicious jams and jellies of the Cherry Hut. 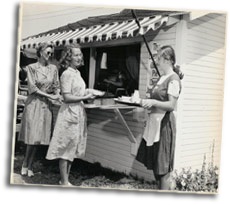 1949 - Jim and Dottie moved to New York state. Father Kraker assumed operations of the Jam Kitchen in Benzonia, and Althea and George of the Cherry Hut in Beulah.

1950-1958 - Althea and George operated the Cherry Hut featuring their own frozen pies made from Mrs. Kraker’s original recipe, gaining a wide distribution of their product.

1959 - After two years as its manager, Leonard Case, Jr. purchased the Cherry Hut in Beulah.

1960 - James L. Kraker, founder of the Cherry Hut and owner of the Jam Kitchen in Benzonia, passed away and both operations were consolidated under the ownership of Leonard Case, Jr.

1964 - Room for inside dining to facilitate serving under all weather conditions built.

1971 - The last vestige of the original Cherry Hut which had been brought in from its first site on the North Shore of Crystal Lake was removed to provide space for a modern food kitchen.

1980 - Northern dining room, patio, and modern bakery added at the Cherry Hut to allow for increased seating and an expanded food menu.

1986 - Remodeling completed at the Cherry Hut.

1999 - Leonard and Brenda’s son, Andrew, graduates from Michigan State University with a degree in Restaurant Management and oversees the Cherry Hut on a daily basis.

2001 - Andrew marries Christy Gaylord, who also works at the restaurant in addition to her full time job as a high school choir teacher at Benzie Central H.S.

2002 - Leonard and Brenda Case along with their children Amanda, Andrew and his wife Christy celebrate the Cherry Hut’s eightieth anniversary and are all still very active in day to day operations.

2004 - The Cherry Hut undergoes a complete remodel. A new dining room, patio, bakery, and kitchen, are among many new features added.

2006 - The Cherry Hut opens for its 84th season on May 13th. Voted Business of the Year by the Benzie County Chamber of Commerce and honored at the Chamber's Annual Dinner.